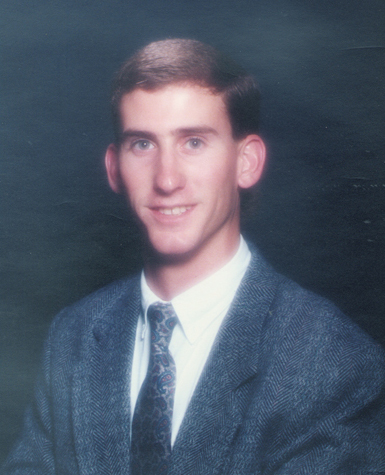 Jaysn Flynn Jameson (October 14, 1967 — October 17, 1991) was a very friendly, fun-loving, loyal, compassionate and caring man. He never met a stranger and everyone that met him fell in love with him. Jaysn was a vivacious, lovable person who was always sincere and made everyone feel comfortable around him.

He was very funny; always ready with a joke or an odd stunt to make people laugh. Jaysn loved making people laugh and enjoyed life to the fullest. People gravitated towards Jaysn because he made them feel good and always garnered their respect and their affection. He was always very charming and loving to those around him.

Jaysn graduated from Southwestern University in 1990 with a Bachelor of Science degree in chemistry. Following graduation, Jaysn went to work for Dow Chemical in Freeport, Texas. As a reward for doing a great job, his boss treated Jaysn and a close friend and colleague to a scuba diving excursion in the Gulf off the coast of Freeport in October of 1991. Unfortunately Jaysn and his friend were caught in a large undertow while diving and when they surfaced they were too far away from the boat to make it back safely. The Coast Guard was not able to locate Jaysn and his friend until the next day holding onto a buoy. Jaysn had passed away shortly before the Coast Guard arrived. Soon after his death, family and friends established the Jaysn Jameson Memorial Scholarship Fund. Jaysn was very active at Southwestern and loved everything about the University. He was an avid runner, which is why the Fun Run is an excellent way to preserve his memory and raise money for his named scholarship.

The Jaysn Jameson Memorial Scholarship was awarded to a student for the first time in 2000. The criteria to receive this scholarship are that the student must be a science major and demonstrate need for the financial assistance. These are the same criteria that Jaysn met while attending Southwestern. 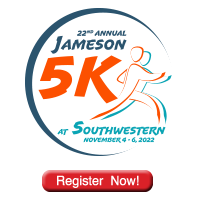 Countdown to the Run! 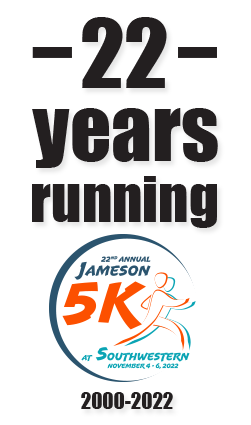 Countdown to the Run

Express Business Network is a proud original sponsor of the Jameson5k at Southwestern.  22 years and running strong!